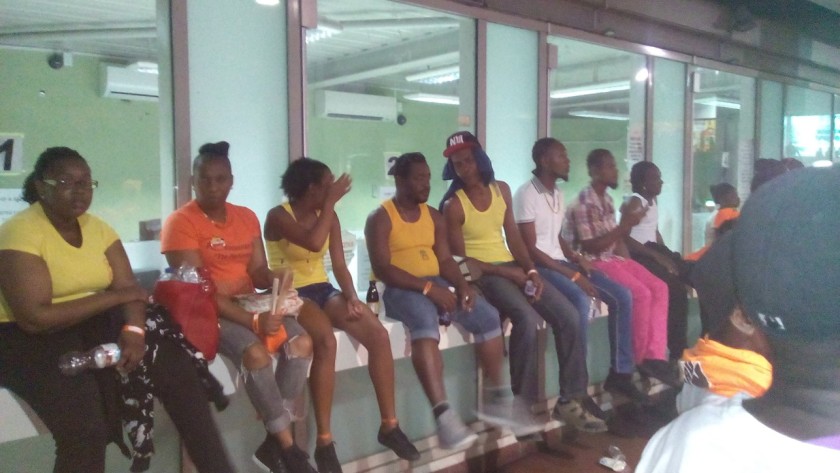 It used to be that trying to obtain a better life for yourself in Jamaica was like a man running up a down escalator, not realizing that the escalator was running down. You had work ungodly hard just to get where you wanted to go. Well, what if you can’t even get to run up the escalator in the first place? An incident that took place at the People’s National Party rally in Half-Way-Tree on the night of the 31st of January, can be taken as what happens the escalator gets blocked.

The Jamaica Urban Transit Centre’s main Half-Way-Tree bus park is divided into an upstairs and downstairs section. When entering the conference for the first time, one gets of the (usually chartered) bus, walks to upper the section, and towards the centre of the city where the rally is situated. You may also walk to another upper section, the top floor, if you wish to easily get to your bus, or get to Molynes Road. That wasn’t happening about after about 7 in the evening. Police blocked off the stairs. Why? “Councilors and candidates only pass this point!” The upstairs section had then been refashioned to be used as a speech rehearsal room, among other things. So now that we were down, there was no way to get back up to where we were originally. Unfortunately, none of the supports that were with me seemed to get the symbolism of that particular event.

Notice that in the video, the supporters were calling the policemen “Labourites” (the main opposition party is the Jamaica Labour Party). It’s not that the councilors and candidates failed to create a secure area for them to congregate outside of the bus park. It’s not that they failed to realize beforehand that their supporters would need to go up- and downstairs, in the central location of the rally. What we have here is that the typical “die-hard”, not just PNP, voter fails to see that her political actions impact her personal life. The politicians up at the top know that they won’t be blamed for their actions, but that the police would be. They don’t see the need to curry favour with the supporters. They know that once there on top, they’ll stay on top. And that those on the bottom will stay on the bottom.

This is it. The final stretch. No, not for the election on the 25th of February, but final stretch as in final. For all intents and purposes, Jamaicans are now locked in three classes: rich, poor, and broke. Nobody talks about social mobility in Jamaica anymore. Yes, we do talk about education, Business Process Outsourcing jobs that are being created, and other such economic indicators, but those don’t matter. What does matter is that the 100 dollar bill can barely buy what it could 4 years ago, much more 8 years ago. And number of 100 dollar bills in one’s purse or wallet hasn’t changed. That is because our politicians are more focused on giving the IMF and multi-laterals interest on their loans than to be bothered with such silliness like sustained economic growth, stable exchange rates, and whatever. The type of PNP supporter that goes to such a rally simply cannot imagine a better life for themselves, not in the types of leaps and bounds that one sees in the history of nations like South Korea, or post-World War 2 Western Europe. The idea that your wallet can become fatter without having to stand in line at the Western Union or the MoneyGram is an alien concept to them.

What makes The System so perverse is that the typical die-hard PNP supporter cannot see how far he has fallen down the stairs. He doesn’t even realize that there was a staircase in the first place. Voting is more a social event done as a member of a tribe than a form of political action that is a necessity in a functional democracy for those attending these rallies. Tribal peoples don’t react to rational appeals. Splitting and ad hominem attacks are how they engage in political discussion. Those at the top of the staircase make their decisions based on how much more they will get from the next tax cut they will get this time around. After all, when you’re at the top of the staircase, its easy to catch the money when our political leaders decide to give out tax cuts and contracts. But how long the tribe will hold together when there’s no more space downstairs, or when the money stops trickling down is something I don’t want to be around to see.

4 thoughts on “The Problem with PNP voters. In a 30 second video.”